Thursday 12th July 2018: Private Eye Podcast.
Sarah Shannon investigates Tidal Lagoon(s) and Mark Shorrock’s Cornish quarry plans (as well as some other stuff he has been up to). This broadcast is a superb summary of the case to date. Private Eye Podcast Episode 35

Monday 28th May 2018: The Telegraph (Online).
Jillian Ambrose, Energy Editor reports that Ministers are to break their silence over backing Swansea Tidal Lagoon. The Telegraph 28.5.18

Thursday 17th May 2018: Not A Lot of People Know That.
Paul Homewood takes a forensic look at recent events in his blog entitled ‘Did Mark Shorrock mislead Select Committee?’ NALOPKT 17.5.18

Thursday 17th May 2018: The Times.
Emily Gosden, Energy Editor reports that Mark Shorrock CEO of Tidal Lagoon faces questions from the parliamentary chairmen over evidence he gave them at 9.5.2018 meeting. The Times- 17.5.18

Saturday 11th May 2018: Not A Lot of People Know That.
Paul Homewood gives an update on Tidal Lagoon following the joint BEIS & Welsh Affairs Committee meeting held at Westminster on 9.5.2018. He discusses some of the environmental concerns surrounding the project, including sourcing millions of tonnes of rock from Dean Quarry in Cornwall. NALOPKT 11.5.18

Friday 10th May 2018: The Times.
Emily Gosden, Energy Editor reports that Tidal Lagoon ‘would need large subsidy’ to cut costs. This follows the BEIS and Welsh Affairs Committee meeting that took place in Westminster on 9.5.18. The Times 10.5.18

Friday 5th May – Thursday 18th May 2017: Private Eye No. 1443. ‘Old Sparky’ dares to delve into the CV of Mark Shorrock who owns Dean Quarry on the Lizard Peninsula in Cornwall and is also the CEO of many Tidal Lagoon companies. He questions whether the Swansea Tidal Lagoon, or as he puts it “this would-be DeLorean of the Deep” will find its way into the Tory manifesto? Private Eye No. 1443

Friday 28th April – Thursday 4th May 2017: New Statesman. India Bourke investigates whether Tidal Lagoon energy can be both clean and green? CADS voice their opinions over CEO of Tidal Lagoon and his not so green quarry plans. New Statesman

Friday 24th March – Thursday 6th April 2017: Private Eye (edition 1440).
While CEO Mark Shorrock awaits final decision on his plan to hold back the tide at Swansea – trouble is brewing across the water in Cornwall. What was that again about “reverence for nature” at the heart of all that Shorrock does? Private Eye 1440.

Saturday 14th January 2017: Not A Lot of People Know That.
Tidal Lagoon Plc has produced this video, to explain its vision for the project in Swansea Bay (which is principally aimed at a Welsh audience and includes a couple of sentences in Welsh at the beginning). It’s CEO hopes to use rock from Dean Quarry in Cornwall for the lagoon breakwater. Paul Homewood investigates. NALOPKT 14.1.2017 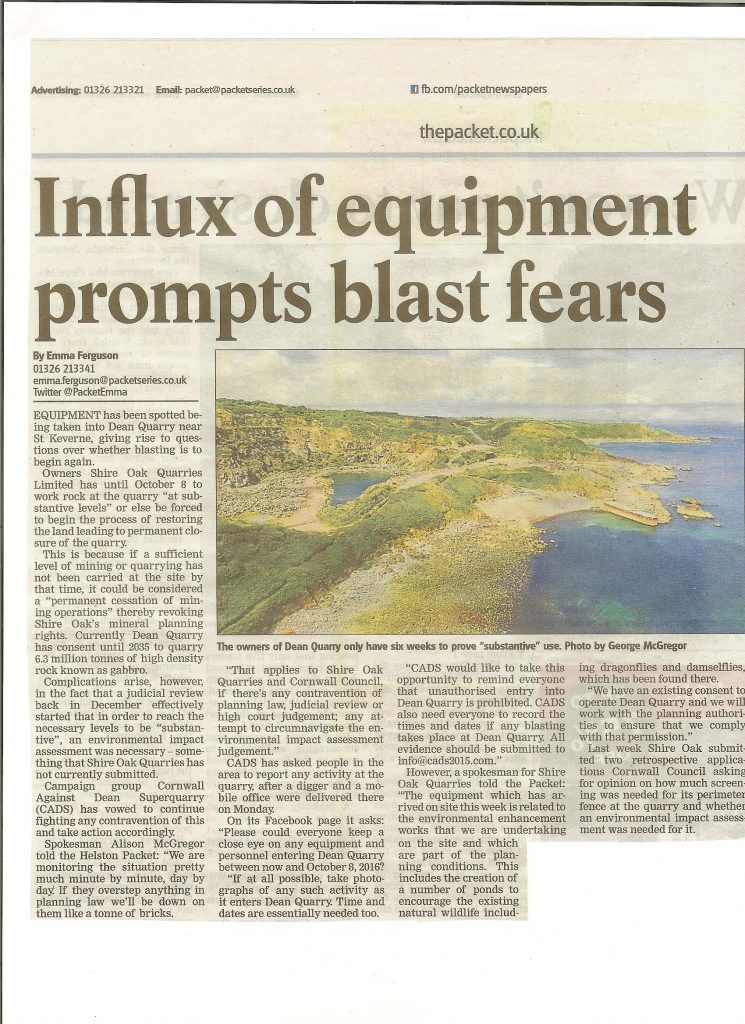 Monday 20th June 2016: Ecologist. There are now some 50 Marine Conservation Zones (MCZ) in England & Wales. Amy Hall reports on how campaigners fighting the re-opening of a Cornish quarry in one of the zones are effectively testing what the designation really means and how much protection it guarantees. Ecologist 20.6.2016

Sunday 17th January 2016: The Sunday Telegraph (Online version). With the government announcement today of 23 new Marine Conservation Zones (MCZ’s) in UK waters, Emily Gosden, Energy Editor, investigates how these new protections are set to test the Manacles MCZ by the re-opening and up-scaling of Dean Quarry. The Sunday Telegraph 17.1.2016

Sunday 17th January 2016: The Sunday Telegraph. With the government announcement today of 23 new Marine Conservation Zones (MCZ’s) in UK waters, Emily Gosden, Energy Editor, investigates how these new protections are set to test the Manacles MCZ by the re-opening and up-scaling of Dean Quarry (page 10). The Sunday Telegraph 17.1.2016

Thursday 14th January 2016: BBC Radio Cornwall Drive-Time Programme.
Go to 9 mins 40 secs into the programme to hear reporting by Hannah Stacey on the Dean Quarry story and an interview by Christopher Tofts, Partner at Stephen Scown who represented Silke Roskilly and won the recent Judicial Review Roskilly v Cornwall Council. According to Christopher: “The point that we pointed out to the judge was that Cornwall Council had not screened the application when they were supposed to, which was within 3 weeks of the application. Instead they did not do it until they were prompted which was almost 4 months after the application. Where people follow the regulations I would not expect that a similar result would occur”. BBC Radio Cornwall 14.1.2016

Thursday January 7th 2016: Planning Resource (Online version). The High Court has quashed a planning permission issued by Cornwall Council for development in a dormant quarry located in an AONB following the secretary of state’s confirmation that it involved development which was likely to have a significant environmental effect under the Town and Country Planning (Environmental Impact Assessment) Regulations 2011. Susie Sell reports. PlanningResource 7.1.2016

Tuesday 22nd December 2015: Planning Resource (Online version). A Cornwall council’s decision to approve an application to re-open a quarry without an environmental impact assessment has been deemed unlawful by a High Court judge, it has been revealed. Susie Sell reports. PlanningResource 22.12.2015

Monday 16th November 2015: The Packet (Helston Edition). High Court to rule on Dean Quarry. Judge is expected to rule within weeks on whether planning permission at a quarry on the Lizard Peninsula was lawfully approved. Peter Johnstone reports. The Packet 16.11.2015

Monday 16th November 2015: The Packet (Online version). High Court to rule on Dean Quarry. Judge is expected to rule within weeks on whether planning permission at a quarry on the Lizard Peninsula was lawfully approved. Peter Johnstone reports.  The Packet 16.11.2015

Monday 2nd November 2015: BBC One Show. A snagged fishing net cut loose from a trawler is a potential death trap for the rich wildlife of the Manacles Marine Conservation Zone. Miranda Krestovnikoff from the BBC One Show joins Falmouth based Mark Millburn from Atlantic Scuba who have volunteered to cut the net free. BBC One Show 2.11.2015

Monday 21st September 2015: The Packet (Onine version). Campaigners against Dean Superquarry will take their fight to the high court next month after a date was set for a judicial review of planning permission. Peter Johnstone reports.  The Packet 21.9.2015

Thursday 20th August 2015: The West Briton. Letters & Opinion. Gillian Lutman from St Keverne writes that Times in this quarry area have changed & discusses the economic implications that the latest proposals will have on the area. WEST BRITON LETTER 20.8.2015

Monday 15th June 2015: The Guardian. Terry Macalister, Energy Editor investigates the allegations that a £300m contract with a Chinese company to build the sea wall for Tidal Lagoon Swansea Bay may have been awarded improperly. The Guardian 15.6.2015

Sunday 14th June 2015: The Sunday Telegraph. Christopher Booker investigates the environmental impact of Tidal Lagoon Swansea Bay on Welsh sea life, our Cornish Marine Conservation Zone (being the proposed source of rock). Booker comments on the twists and turns of the project & the global track record of the projects largest investor, the China Harbour Engineering Company. The Sunday Telegraph 14.6.2015 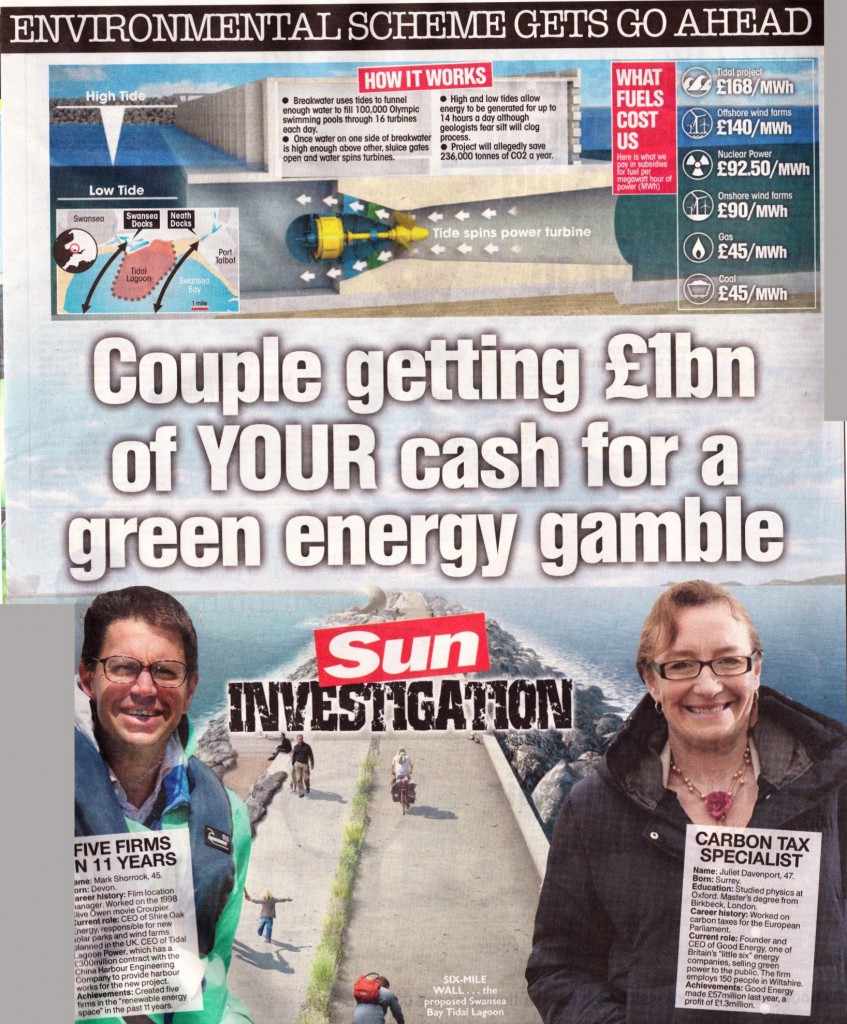 Wednesday 10th June 2015: The Packet (Helston & Falmouth/Penryn Editions). David Barnicoat reports on the fight by campaign group Cornwall Against Dean Superquarry to protect the Manacles Marine Conservation Zone from developers wanting to re-open the disused quarry and turn it into a modern port facility. Packet 10.6.2015

Tuesday 9th June 2015: The Guardian. As The Energy and Climate Change Secretary, Amber Rudd is poised to give planning permission on Tidal Lagoon Swansea Bay, Energy Editor Terry Macalister discusses Rudd being dragged into a row over plans to mine stone in Cornwall for the project & ship it through a Marine Conservation Zone. The Guardian 9.6.2015

Sunday 7th June 2015: Sunday Telegraph. Christopher Booker discusses some of the technical issues surrounding Tidal Lagoon Swansea Bay, ahead of Amber Rudd’s decision on the future of this project which is expected on or before Wednesday 10th June 2015. Sunday Telegraph 7.6.2015

Thursday 4th June 2015: The Guardian. Letter to The Editor from Sir Nicholas Serota, Director of the Tate Art Museums & from Porthallow, Cornwall. ‘Green’ energy at the expense of the environment? The Guardian 4.6.2015

Thursday 14th May 2015: Scubaverse. Jeff Goodman, Conservation Editor of Scubaverse discusses the impacts on life under the sea if development of Dean Quarry is allowed to go ahead in this Marine Conservation Zone. Scubaverse May 2015.

Thursday 14th May 2015: BBC1 Spotlight Programme: BBC South West Environment Correspondent, Adrian Campbell visits the Manacles Marine Conservation Zone(MCZ) to see first hand why this area is unique. As evidence emerges from dive surveys, the legal challenge to stop developers plans looks set to make this a UK test case for industralisation within a MCZ. Click on link & scroll to 9min 11sec for feature within this programme. BBC1 Spotlight 14.5.2015

May 2015 Edition: BBC Wildlife Magazine. Article written by Jo Anselmi from Porthkerris Dive Centre who is currently working with the Marine Conservation Society and Exeter University on a wildlife survey of the Manacles MCZ. Unlike the work done for Shire Oak Quarries environmental impact assessment, she explains this survey will be carried out by divers. BBC Wildlife May 2015 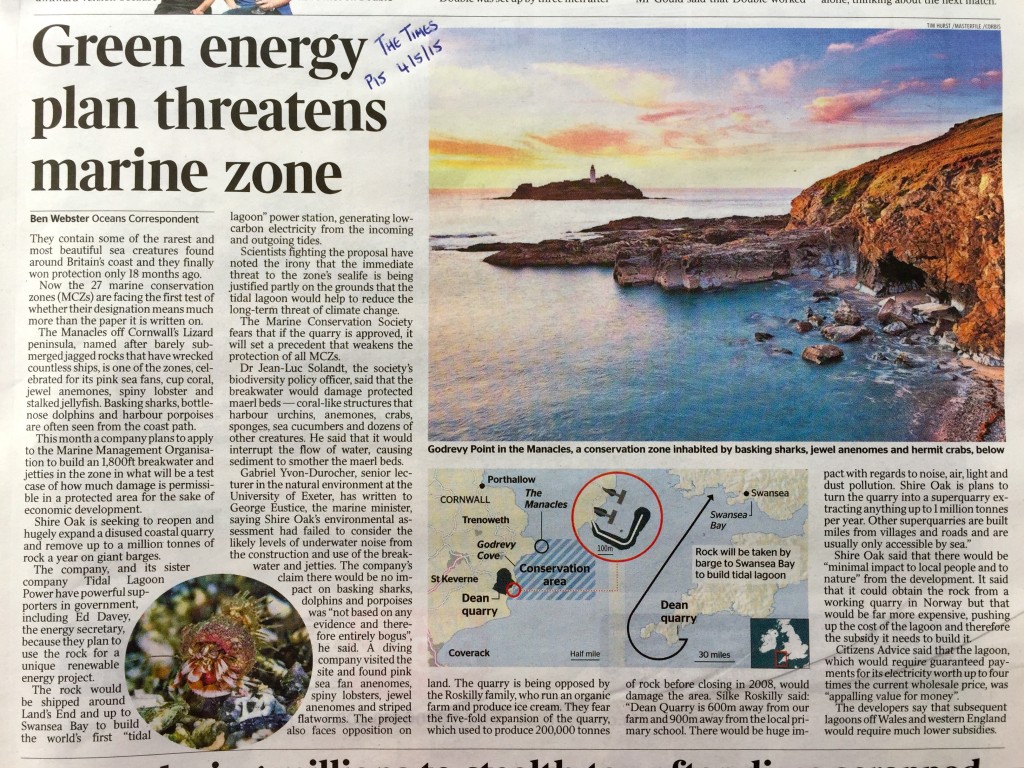 Thursday 30th April 2015: West Briton. Article reported on the meeting of all parliamentary candidates in the run up to the election. ALL candidates agreed on only one local issue – Candidates Oppose Quarry Plans.

Sunday 19th April 2015 : The Sunday Telegraph article by Christopher Booker. The following article referenced Dean Quarry, in addition to concerns and searching questions raised by Giles Scott (Head of National Infrastructure Consents at the Planning Inspectorate) who is seeking a reply no later than 28 April 2015. 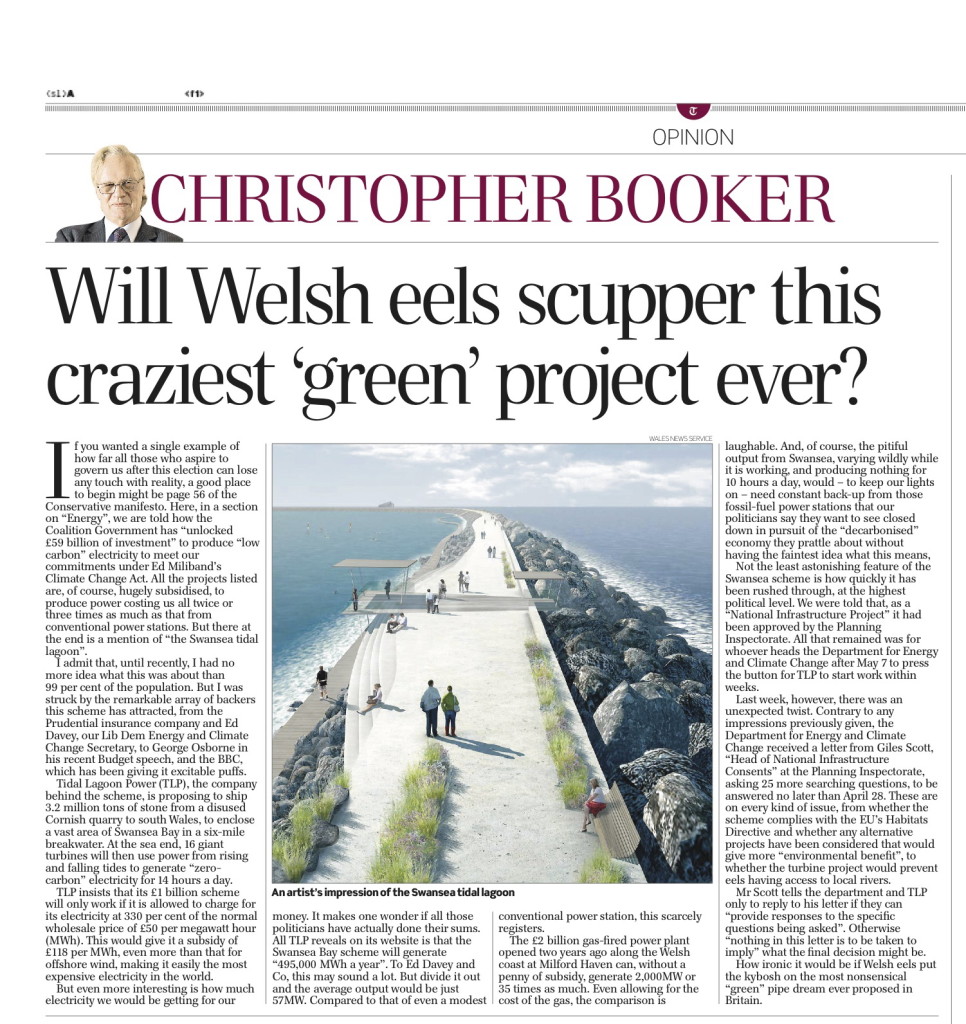 Thursday 26th March 2015 – The Times. A letter to the editor by Paul Racey – Regius Professor of natural history (emeritus), University of Aberdeen and honorary visiting professor, University of Exeter in Cornwall. Professor Racey expresses concerns about the proposed development plans for Dean Quarry and it’s impact on the local communities & marine environment.

Thursday 16 April 2015 – Daily Mail article by Christopher Booker. £1bn lagoon that could be Britain’s pottiest ever green scheme. Commenting on a £1 billion scheme to build a colossal U-shaped stone breakwater, six miles long, enclosing the whole of Swansea Bay in South Wales, containing 16 giant submerged turbines, whose blades would be seven metres across and contains references to the extraction of rock from Dean Quarry. Daily Mail (Tuesday 16 April 2015).

March 2015 :  The Today Program, Radio BBC4 had an interview with Mr Shorrock on Tidal Lagoon Swansea and his green credentials.  However there was NO mention of Dean Quarry. Please help by phoning BBC Complaints to complain about biased reporting on 0370 100222 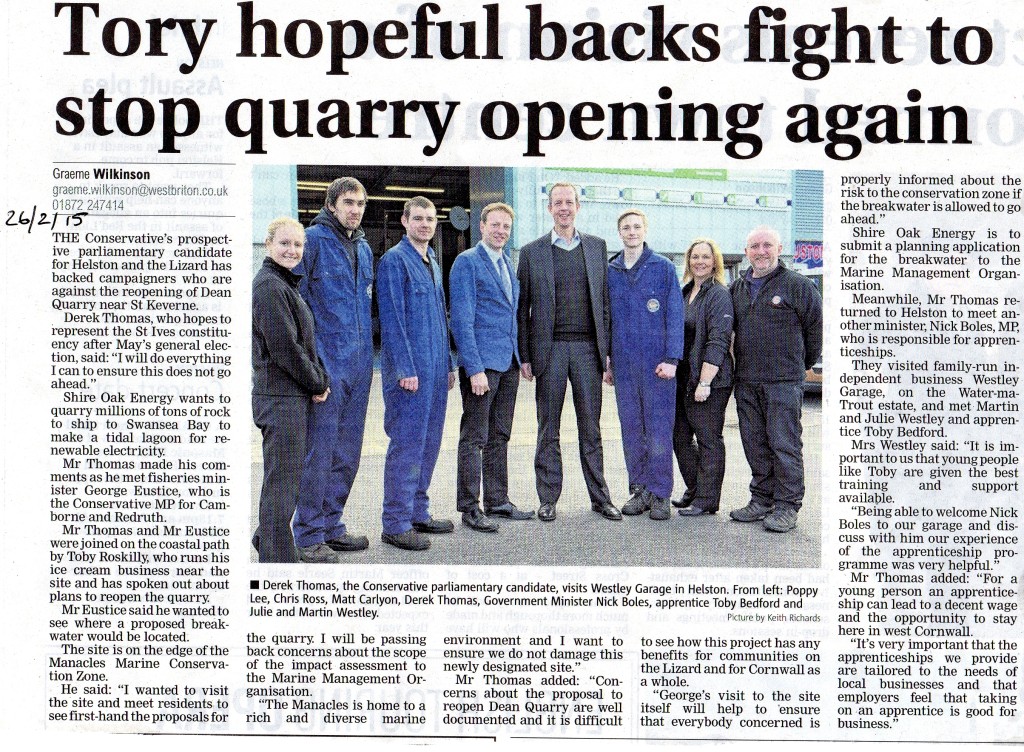 Monday, 23 February, 2015 – Prospective Conservative MP, Derek Thomas took Fisheries Minister, George Eustice MP, to Dean Quarry to see the potential impact of the proposed breakwater on the recently designated Marine Conservation Zone. George Eustice and Derek Thomas met local resident and businessman, Toby Roskilly, who provided a brief summary of the super quarry proposal and took them to the site of the proposed breakwater. Follow this link for more information and press coverage on the visit from George Eustice MP